U.S.-made A-29 Super Tucano aircraft officially inducted into Nigerian Air Force by Biden can be used against #BiafraLand

U.S.-made A-29 Super Tucano aircraft officially inducted into Nigerian Air Force and ok'd for use against #BiafraLand as Biafra has been falsely designated as terrorist! 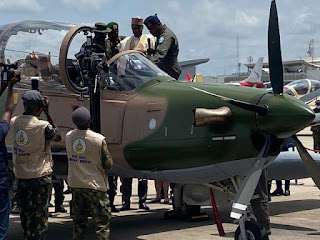 Would President Donald Trump have gone through with the delivery of Tucano Jets to Nigeria and continued the training of Nigerian military enabling them with this high powered attack system? We can't know that now but the Biden administration is trusting that Nigeria won't. Does Joe even care?

It has been announced by Nigerian press that "the United States may have placed some restrictions on the use of the newly acquired A-29 Super Tucano light attack and trainer aircraft for the Nigerian Air Force (NAF)." That restriction is defined as not to use the Tucano Jets against a population unless they have been proscribed as terrorists.

The fact that the Buhari administration, since 2017 had designated the Indigenous People of Biafra as a terrorist organization is all that is needed to give permission to attack the South East of Nigeria, which is #Biafra or also known as #BiafraLand, currently consisting of approximately 70,000,000 people who are Christian and Jewish people and who seek their independence from Nigeria again after the failed Biafran Civil War 50+ years ago.

Biafra population density of about 500 persons per square mile is the highest in the whole of Africa.

Biafra Leader Nnamdi Kanu is in DSS custody awaiting his next court date of 10November2021 on the sham charges which emanated after his extraordinary rendition (kidnapping) from Kenya. The world was on edge waiting to see if he would be produced in court. So far, only his legal team had been allowed to see him. On 21October2021 we saw that Mazi Nnamdi Kanu is alive, after his capture on 29th June 2021 and subsequent kidnapping and torture in Kenya and Nigeria. Nnamdi Kanu is a British citizen but so far as known, has not received a visit from any representative of Britain.

Extraordinary rendition, irregular rendition or forced rendition, is the government-sponsored abduction and extrajudicial transfer of a person from one country to another with the purpose of circumventing the former country’s laws on interrogation, detention, extradition and/or torture.

The United Nations Convention Against Torture, which the U.S. Senate ratified at the urging of then-President Ronald Reagan, and a 1998 federal statute both explicitly prohibit extraordinary rendition. Yet there has been no accountability for those who authorized and carried out these crimes. Not one victim has yet received an apology, let alone a day in court.

Victims of extraordinary rendition have alleged being subjected to a variety of interrogation methods that are prohibited under U.S. and international law at the hands of CIA officials operating “black site[s]” or “dark prison[s].”10 The treatment is degrading: victims have been stripped naked, blindfolded, shackled, and forced to make recorded false confessions.11 The physical pain and psychological torment are severe: they have been deprived of sleep and food; subjected to loud noise and blinding light twenty-four hours a day; cut from head to toe with a scalpel for the purpose of pouring hot stinging liquids into the open wounds; and shocked with electrodes on ear lobes, nipples, and genitals.

Just as Nigeria used United States of America precedents in the extraordinary rendition of Nnamdi Kanu, their prior designation of  him and his 70,000,000 followers as terrorist, the Tucano Jets will be implemented.

Just as Biden left all the weaponry with the Taliban in the negligent exiting of Afghanistan and hoped that the Taliban will behave themselves, in this debacle, Joe joins a vicious conspiracy to perpetrate genocide on an innocent population with the Tucano Jet tools in the oil-rich and heavily populated Biafra. In the Biafra case, I will go as far as saying that Biden is acting with intent to harm the Indigenous People of Biafra. 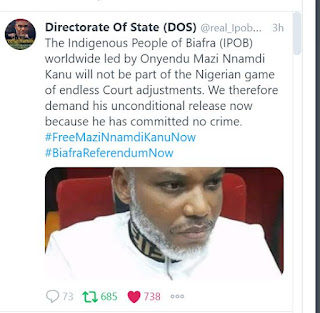