As I write on this platform called Blogger, I know that it belongs to Google and their parent company Alphabet who own many companies. They use their power to dominate and control the online world. When I seek conservative news on Youtube, I see their childish manipulation of images (inserting photos of Donald Trump on Tucker Carlson's show that cover the faces of his guests) and outright censorship by banning other voices who  advocate for free speech. 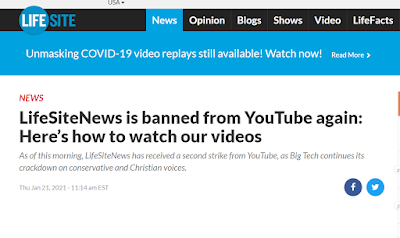 NEWSMAX is a rising star. It is just a matter of time before they are banned on Youtube. Now you have Democratic members of Congress writing letters to cable TV providers urging (threatening?) them to kick Newsmax off their services. Watch the video above. It is still on Youtube, but not for long.

I don't use Google's search engine anymore. I use DuckDuckGo which does not censor and offers interesting perks, such as private browsing.

Is America a failed entity? Seems we are headed there, on a runaway train.