In the Lebanese cesspool of corruption and mismanagement, the actual reason for the Beirut blast or the identity of men behind it may never be known 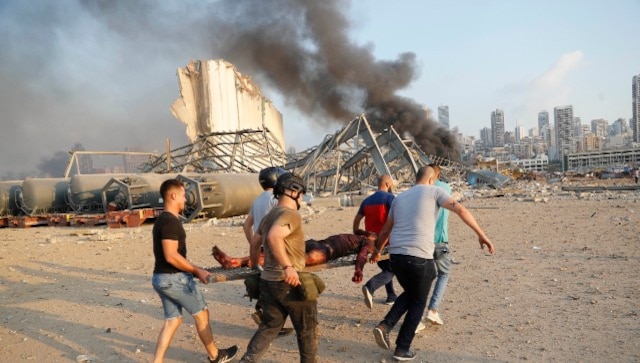 The Beirut blast earlier this week has triggered a second chain reaction of devastation, conspiracy theories and outpouring of Lebanese anger on streets. The spotlight is back on the most well-equipped and dangerously armed global terrorist organisation, the Hezbollah, and its connection to the assassination of the country's Sunni prime minister Rafiq al-Hariri by its four suspected members in 2005.

The apocalyptic mushroom cloud over Beirut on 4 August, which enveloped the Lebanese in fear and consternation, and killed more than 150 while injuring over 5,000, could push down the once-known "Paris of the Middle East" further into global isolation and earn more opprobrium, triggered by the Iran- and Syria-backed Shia terror group’s bloody past and its entrenchment in the corridors of power in Lebanon.

The nuke-like explosion, whose impact was felt as far as Cyprus, occurred three days before a UN-backed tribunal was slated to deliver verdict on Hariri’s assassination that could have indicted the four Hezbollah members — Hussein Hassan Oneissi, Hassan Habib Merhi, Salim Jamil Ayyash and Assad Hassan Sabra. Following the devastating explosion, the verdict has been postponed to 18 August.

It is pretty illogical to expect the Hezbollah to give up its four members, who disappeared from public life years ago. The explosion could be connected to the verdict, which would have pressured the terror group to turn over the four members. When Hariri was killed, mass demonstration and sectarian strife engulfed Lebanon, which itself faced global pressure.

While the former prime minister son Saad Hariri was looking “forward to 7 August (the verdict day) being a day of truth and justice for Lebanon and a day of punishment for the criminals”, Hezbollah-backed Diab clearly stated that he wants no further turmoil and strive that could be triggered by such verdicts.

Though the possibility of an accident triggering the blast cannot be ruled out, it would be naïve to assume that 2,750 tonnes of ammonium nitrate stored at Beirut Port would blow up like that just three days before the verdict. Hariri, who was backed by the West and Sunni Gulf Arab countries, was killed along with 21 others by a truck carrying 3,000 kilogrammes of explosives 2 kilometres away from the warehouse blast site.

The aftermath of Tuesday's blast has become murky with Aoun indicating a foreign hand in the bloody temblor. The Lebanese president said that investigators would probe “possibility of external interference through a rocket or bomb or other act” or whether it was caused due to negligence or accident.

Israel denied any involvement immediately after the blast, yet conspiracy theorists pointed out that Israel could have triggered the blast. Hezbollah had threatened to retaliate against the killing of its member Ali Kamel Mohsen in an Israeli airstrike near Damascus International Airport in the last week of July.

The explosionis no doubt an intricate and deadly concoction of conspiracy theories — even US President Donald Trump termed the blast as an "attack" — but one can also not point out the mismanagement of such a dangerous stockpile of a chemical used in terrorist strikes and the intention behind its storage at the port, which, like others, is controlled by the Hezbollah. A Lebanese army helicopter flies over the scene where an explosion hit the seaport of Beirut, Lebanon. AP

Four years ago, Danny Danon, then-Israeli ambassador to the UN, had warned the UN Security Council (UNSC) that the Beirut Port is “now the Port of Hezbollah” with Iran supplying arms to the group by exploiting “civilian maritime channels (the port)".

According to The Jerusalem Post, Danon told the UNSC that Israel found that “Iran and the Quds Force (the secretive elite unit of Iran’s Revolutionary Guards) have begun to advance the exploitation of the civilian maritime channels, and specifically the Port of Beirut, by sending dual-use items into Lebanon to advance Hezbollah’s rocket and missile capabilities and conversion programme”.

A sinister angle to the ‘Beirut’s apocalypse’ was the sudden diversion of the Moldovan-flagged ship, the MS Rhosus, which started from Georgia to deliver the ammonium nitrate to Mozambique-based explosives company Fábrica de Explosivos de Moçambique (FEM), to Beirut in 2013.

The ship’s owner Russian business Igor Grechushkin, who stays in Cyprus and has already been questioned after the blast, had told its Russian and Ukrainian crew that he was bankrupt and asked them to load extra cargo to cover the travel costs, according to CNN. But the crew refused to load the extra cargo as it was too heavy, forcing the MV Rhosus to drop anchor for several days.

Ultimately, the ship was impounded at Beirut Port for failing to pay port fees, “gross violations in operating a vessel and complaints filed by the crew”, according to the Seafarers’ Union of Russia, the CNN reported.

The MV Rhosus never reached Mozambique and the ammonium nitrate had been lying at the warehouse since 2014. According to The New York Times, the leaking ship finally sank at a short distance from the blast site in February 2018.

On the non-delivery of the chemical, a spokesperson of FEM told CNN that “it is not common”.

According to a CNN source, “It’s a dangerous material; it’s a very powerful oxidiser and is used for producing explosives. But it’s not like gunpowder that you just light a match and it will immediately go off like pyrotechnics.”

What makes the whole episode of a ship loaded with 2,750 tonnes of ammonium nitrate and owned by a Russian businessman making a detour to Beirut and anchoring there suspicious is the proximity of Russia to Syria and the Hezbollah. Also, Russia never designated the Hezbollah as a terrorist organisation. Lebanese army soldiers stand guard at the scene where an explosion hit on Tuesday the seaport of Beirut, Lebanon. AP

In 2015, Russian deputy foreign minister Mikhail Bogdanov categorically said that the country doesn’t consider Hezbollah — “a legitimate socio-political force elected by people to the Lebanese Parliament” — a terrorist organisation because it had never committed any acts of terrorism on Russian territory. Several countries, including the US, the UK, Germany, Canada, Australia, New Zealand, the European Union and Israel have designated the group as a terrorist organisation.

It is unlikely that the chemical was stored without the knowledge of the Hezbollah, which has a vast intelligence network. Though Hezbollah secretary general Hassan Nasrallah has vehemently rubbished claims that the terror group had stored missiles or bombs or ammonium nitrate at the warehouse, the guerrillas were busted in several countries — London, Berlin, Thailand, Cyprus and Bulgaria — for storing the deadly chemical and its top operatives were targeted by the Israeli Air Force for stashing Iranian long-range rockets and missiles in their homes.

Hezbollah, whose main goal is destruction of Israel, is notorious for storing ammonium nitrate in several countries to strike Israeli targets or kill Jews. In 2015, the London Metropolitan Police and the MI5 discovered three metric tonnes of the chemical kept in ice packs in a storehouse in London.

The Shia militia group also used the same technique to store the chemical in Germany between 2012 and 2016. With Mossad’s help, Germany discovered hundreds of kilogrammes of ammonium nitrate stored by Hezbollah early this year and finally designated it as a terrorist group. According to the The Telegraph, the ammonium nitrate discovered in 2015 was to be used for “proper organised terrorism” and the MI5 arrested a man for allegedly planning terrorist attacks — though not in the UK.

In 2015, Hezbollah’s military wing member Hussein Bassam Abdallah was jailed for six years in Cyprus after pleading to terror charges and for storing 8.2 tonnes of ammonium nitrate for three years in his house.

Abdallah “played the role assigned to him within the broader design of things so that eventually Hezbollah would be able to harm through terrorist attacks, Israeli interests in Cyprus”, Judge Nicolaos Santis said.

In fact, in a speech broadcast by the Lebanese Naharnet news website in 2016, Nasrallah threatened to bomb the ammonia storage tanks in the northern Israeli port city of Haifa which would be “exactly as a nuclear bomb”.

“We can say that Lebanon today has a nuclear bomb. Any rocket that might hit these tanks is capable of creating a nuclear bomb effect,” he said, The Times of Israel reported. Subsequently, Israel removed the ammonia tanks from Haifa.

If the port explosion wasn’t an accident, the real culprits would never be apprehended considering the domination of the Hezbollah in the government and the way investigations crawl in Lebanon — a case in point is the Hariri assassination; it has been 15 years but the killers have not been nabbed.

Since the blasts rocked Beirut on Tuesday,more than 16 people have been arrested, including Lebanese customs department chief Badri Daher and his predecessor and Shafik Mehri and the port’s general manager Hassan Koraytem. However, in the Lebanese cesspool of corruption and mismanagement, the actual reason for the blast or the identity of men behind may never be known.

Update: Lebanese Prime Minister Hassan Diab announced his and his entire cabinet's resignation today, six days after the Beirut blast that killed more than 160, insured thousands and was followed by an intense uprising of protest by the people of Lebanon.