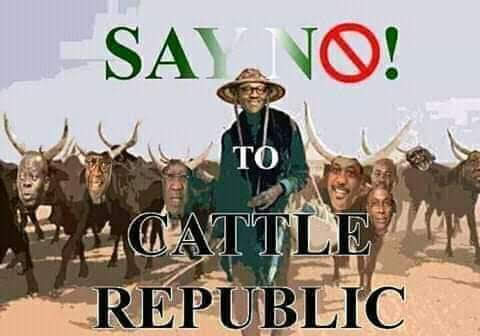 Civil Disobedience in BiafraLand? YES! You may have noticed Nigerians are all atwitter over the impending Nigerian presidential election and the excitement for the #BiafraReferendum taking place on 16 February 2019, the same day. Everything has intensified into a fever pitch. Anxiety screeches from the online tabloids, social media and even Reuters, a mainstream international news house has picked up the story. A video of a Kaduna Governor El-Rufai in Nigeria threatening to put foreign interferers into body bags is going viral on social media. The reason for all of this angst by the Islamic State of Nigeria, is adding up to the issue of the imposter and Sudanese actor sitting in President Buhari's castle with the country of Nigeria being run as a false flag by the Sokoto Fulani cabal.  #Jubril

As you read more of this you will see why I advocate for the Biafran people. Between 2-3 million Biafrans will be boycotting the presidential election in Nigeria (they call it the Zoo). They are calling 16Feb2019 their #SitAtHomeReferendum (a silent vote). Those that stay home are considered to be in favor of the Referendum that will make Biafra a nation state which to this point has been only using civil disobedience to state their goals..


Biafra tried this in 1967-1979 but Nigeria and their slavemaster Great Britain, blockaded all the food sources. Approximately 3.5 million died, over two million were children and the rest butchered. The Nigerian govt , run by an Islamic Cabal of Fulani Islamists, are committing an ongoing genocide. To make matters worse the governor of Kaduna, a high powered member of the Fulani Cabal controlled Government has just made threats, both to members of the Indigenous People of Biafra and to any foreign country that any interference in their "election" will be dealt with "and returned in body bags." Nigeria does not take rejection lightly. Especially with all the natural resources that come from Biafra Land, the Southeast claimed as part of Nigeria.


In what dimension do innocent, unarmed good people get slaughtered and then have their organs cut out while still fresh? And who are buying these organs?

As Mazi Nnamdi Kanu, the Leader of the Indigenous People of Biafra with the good and devout Biafrans themselves, toil on the framework for their fledgling nation, they must steel themselves, figure out non-violent means of self-defense with the onslaught of Nigerian Armed Forces unleashed on them with whatever the latest Nigerian Operation formed is: to commit assault and battery, unlawful arrests (kidnappings), murder, rape, theft of organs, desecrating human remains; all perpetuated against the Indigenous People of Biafra in a criminal conspiracy comprised of other bad actors. This list is by no means exhaustive and I will probably be adding to it.

Anambra state under Peter Obi and Ezu River with The Floating Corpses
On January 19th this year the world was served a horrific photographic menu of scores of human bodies found floating on Ezu River in Amansea community of Anambra State. When the local folks discovered the floating corpses they raised alarm but frantic searches within and without revealed no one in the community was missing. Governor Peter Obi, cutting short his trip abroad, visited the scene of horror to bare bear witness to the tragedy. Days and weeks and a month-plus gone nothing concrete has yet been done in terms of diligent investigation to unearth the source of the decomposing dead bodies found in that river.Since no one has been declared missing in the neighbourhood or neighbouring villages and towns in Anambra and Enugu states it follows logically, therefore, that the floating bodies must have been those of citizens killed and brought and thrown into the river at wee hours of the night from elsewhere. So who are these 'criminals', these young men who met their untimely death through 'firing squad' without trial or judgement? The police normally should be able to tell us but the problem here lies in the fact that the police is being accused of being behind the illegal atrocious killings. In other words the police is the chief culprit!
Hundreds (if not thousands) had been executed by security forces especially in Igboland without necessary questions asked nor answers provided. Exploiting the people's ignorance of their rights and bowing to intimidation of the gun has conspired to mystify law enforcement in the south-east in particular. Accusations and counter-accusations are flying everywhere between the police and MASSOB on one hand and the government and human rights advocates on the other. The truth must be made to prevail in this sordid incident that calls for our collective indignation and solidarity with the dead.

The Commissioner of Police in Anambra state, Bala Nassarawa, must be investigated and redeployed if not sacked outrightly for his incompetence and/or complicity in the Ezu River abominable affair. He knows what the SARS men were doing but he preferred to lie his way out! One does not yet comprehend the reason behind the manifest animosity towards MASSOB by governments and their agencies. The open campaign of hostility is reprehensible to say the least! MASSOB has not done anything more unpatriotic or grievous than what Boko Haram in the north, MEND in the Niger Delta and OPC in Lagos are doing. Their non-violent campaign for Biafra cannot be criminalised when the 'terrorists' in the north and in Niger Delta are seeking dialogue or amnesty from the federal government!