Gonzo Journalism: Currently working on The Biafra Faktor, sequel to The Masada Faktor

Natasha's adventures in Israel in 2014, after immigration to the Holy Land are adventurous, Gaza 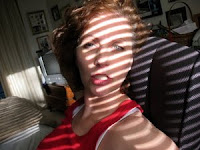 harrowing, and sexy as she attempts to solve the mystery of The Masada Faktor, imparted to her by her mother, at her deathbed. In Israel, with Operation Protective Edge, the
War raging, Natasha realizes the significance of the mystery linked to current events.Why The Biafra Faktor? My involvement and advocacy with the Indigenous People of Biafra has led me to an intense two year study of the situation in West African Biafra Land since the Civil War in the late Sixties. When their attempt to separate and actualize their own country from the British amalgamated country of Nigeria it ended in the genocidal starvation of 3.5 million men, women, and children (estimates of the dead vary and may be as high as six million.) Now, after their leader Nnamdi Kanu and his parents were taken by the Nigerian Army in September of 2017, and since being proscribed as a terrorist group by Nigeria, they are being hunted and butchered by the Islamic regime. Biafrans are committed to a non-violent struggle and, in my opinion, not exercising self-defense. It is only a matter of time before enough will be enough and they may be forced to fight back.

And so, in my new book, as Natasha Bernard struggles to return to Israel after a sojourn in the United States, she becomes involved with the Biafran people. Whether a manifestation of her childhood trauma as a Child of the Holocaust (Natasha's mother mirrors my mother, a Holocaust survivor from Hungary) or simply an empathic response to these highly intelligent and educated people, Natasha becomes embroiled in a conspiracy that spans the globe.

Stay tuned to the further adventures of Natasha Bernard, my alter ego. Is truth stranger than fiction? Or is fiction stranger than truth? When the time comes, I'll let you decide.