Breaking: A Biafran inside Nigeria's Military - "Conversation With Naomi" 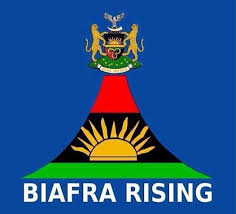 In the beginning my interest in Biafra, then the emerging Biafran history originating as Jewish people from the Land of Israel, along with new friendships have led me to a place which feels holy. I have been contacted by Biafrans with stories to tell. It is different speaking with a person on the ground that is in the fray rather than reading a history book or a current article. It is my great honor to be able to publish these Biafran stories.

It is important to convey how Islamists are taking over every part of the world and how the Igbo Biafran people are coping, trying to stop history from repeating itself when millions of Biafrans were slaughtered or starved to death between 1966-1970.

The following Conversations With Naomi is an interview with a Biafran man who is now serving in the Nigerian military.

Naomi: Thank you for joining me. Please tell me how you were raised, something from your childhood that made you realize your heritage as Biafran.

Anonymous: When I was a child, I think that should be in my eighth year, my father told me how my people were living in peace and harmony, then how everyone surrendered our people; how the British with trade and Christianity enslaved my people. With that and to start they began to colonize us. They noticed that the Northerners, the Hausas and Westerners, and Southwestern Yorubas, and with the little that they had, saw and then knew that we Biafrans are industrious, hardworking, creative, and blessed with many natural resources. So the British then decided to merge us together as One Nigeria without any consultation between the parties if we really wanted to be put together. But they did nothing of such, rather they forced us into this unholy marriage, with the people who did not share beliefs. In fact our beliefs are very different.

Our cultures, language, character, religious and other ways of life; we share nothing in common with those people, nothing at all. And that has been the beginning of my Biafran people's problem after the British left Nigeria and joined us for one hundred years of an unholy marriage.

And the British handed over the power to the Northerners because they are the people who accommodated the British when they were chased away from Nigeria after the 1951 conference at Ibadan Oyo state; when Easterner and some Westerners disgraced them in the Conference.

Immediately the power got into the hands of Hausas and they started treating us badly, eating resources that is our Biafra Land. They divided us as brothers: South East and South South. That's divide and rule and brothers started seeing themselves as enemies. While they are busy milking our people and our resources they tagged us as a minority in our own land! Can you imagine that?

Naomi: Yes, that is terrible. You told me previously that you are in the military. How is it that you, as a Biafran are in the Nigerian military?  Are you able to safely speak about it?

Anonymous: Well, it depends on what actually you want me to talk to you about in the military. I can say that I decided to work for Nigeria military, not that I believe in it for Nigeria or that I am here to kill my people. And also we Biafrans are not also here to defend the integrity of this country to the call. Although it is the oath we took on our inauguration day in the Nigeria army training ground in Kaduna state, the Northern part of Nigeria. We are in this work just as an occupation, to make a living, not to truly die in the work, that's why you see other soldiers fighting the Boko Haram. They are running for their lives over there in the North East, because they are not being taking care of by their government.

Naomi: Who is not being taken care of, the terrorists or Biafrans in military? And do you experience prejudice in the military?

Anonymous: I mean we Nigerian soldiers are running away from Boko Haram terrorists because the government does not take care of its own soldiers. And secondly we are from the Biafran side. No good ranking, we are denied of good postings, we can only be posted in a troubled state. Like in these states that you can find Boko Haram terrorists or militant groups blowing oil up pipelines, that's where they post us because they want to eliminate us through those places. They won't grant us passes to go see our families that will be left behind. You can't see your families for months or years. There is not good salary, not good house, not good weapons, not proper medical, not good environment.

There's nothing like paying us allowances in Nigerian Army like it should be, only the monthly salary, nothing more. No promotion as a Biafran to gain admission into the Nigerian Army, Navy or Air Force Military Academy. We are only on the grace of God not by your merit or your qualifications because it only favors the Northern and Western not for Biafrans. Only a few Biafrans you will see in the Military Academy.

Naomi: Do you fear for your life being in the military and for those that are regular citizens?  Do you have any hope for a peaceful separation from Nigeria?

Anonymous: The hatred for Biafrans is everywhere; both civilians and in the paramilitary side. No Biafran is safe within this murderous country called Nigeria whether in the military or not. Biafrans are being sold to Boko Haram terrorists to be killed by the Hausas' and Yorubas' Army Generals and being ambushed. They are using Biafrans’ blood to enrich themselves and get a better promotion while we die for what we’ll know nothing of. The evil, wickedness, and corruption in the Nigeria Military is what only God can clean, not human beings. Do you know how many Biafrans in Nigeria Army that died every week in the hands of Boko Haram terrorist and Army authorities?
We cover up their deaths from the notice of the public; only those in the barracks know what is really happening.

Naomi: That is shocking information. Can you say what else it is that you as a Biafran wants the world to know?

Anonymous: The only thing me and every true Biafran wants now is to be free from Nigeria. Where we can have some sense of belonging. The place we can call our home, where everyone will be treated equally, where we can express our freedom and be rightly free without being killed, jailed, or incarcerated like they are doing to our leader Nnamdi Kanu. We can’t be truly happy until we are out of Nigeria and Biafra is restored. Biafrans in the North or Western part of Nigeria are not here with a good mind; either they are afraid of one thing or the other from our enemies the Hausa and Yoruba. These people hate us because of the way we are blessed in everything we do: spiritually, physically, and otherwise. God enriched us with many gifts. So they are jealous of Biafrans.

Apart from oil which comes from Biafra Land, almost 70% of Nigeria’s economy is through the hardworking of Biafrans, so tell me, how would this wicked entity with rogues and elements that called themselves political jobbers survive without us? They won’t last much longer. No Northerner or Westerner are able to build any structure; call it house, company, industrial, schools, poultry, and name them. You can see in Biafra Land that it is owned by our people. And so how can they say we are One Nigeria? Who’s fooling who? And Biafrans continue developing every part of their Northern and Western side and after that they will chase us away and claim our properties as their own.

We believe that Nigeria burned and destroyed the Kanu Market that Biafrans dominate in Northern and Western Nigeria. And nobody talks. Honestly, Naomi, Biafrans are prisoners in Nigeria. I think I have to rest my case here.

Naomi: Thank you for sharing all of this. I only hope you will stay safe. I pray for you and your family. I fear for you being in the Nigerian military. This is not a theoretical discussion for me. I see you in your reality. I now hope our readers will also see.