Conversations with Naomi: My Biafran Friend 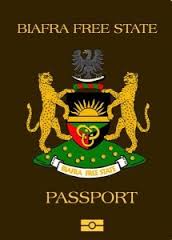 The following conversation with KC from Biafra land is brought to you in the hope of educating the world on the plight of the Igbo people who want to be free of Nigeria. I am doing what I can so that history does not repeat itself and cause another genocide in Biafra as in 1966-1970 during the civil war. KC has kindly consented to allowing us a peek into a Biafran's frame of mind at this critical juncture when Biafra seeks to secede from Nigeria. I highly admire the self determination of the Biafrans.

KC: Good day Madam. I most commend you for having to make a report out of our little conversations. I'd be very grateful if the world learns about Biafran's plight through you.

Naomi: It is my pleasure, KC, and I am so very honored that you are taking the time to speak with me. I have a few questions for you, both about the current situation in Biafra and about your way of life. Is it true that Biafrans serve in the Nigerian military?

KC: Yes some Biafrans serve in the Nigerian army but the present government have made it a point of duty to declare war on those officers. Some sources say that the gallant Biafran soldiers and Christian soldiers alike are taken to the war fronts during their battles with Boko Haram members and they make sure all those Biafrans and Christians are killed.

Last year Nigerian News sources confirmed that about 105 military men were ambushed and killed by the Boko Haram members but we believe that those military men that were killed were actually set up by their fellow officers in the Nigerian Army. Reason being the Army headquarters in Abuja Nigeria denied that they weren't missing but I have a leaked photo of the dead officers*. (*Naomi: I wasn't able to save the photos on my computer but I can tell you they are very gruesome)

The Nigerian army top ranking offices are mostly core Northern Muslims so they conform to the government in power which are mostly core Northern Muslims. Once around 2012 the present governor of Kaduna State Nigeria Mallam Nasiru El-Rufi made a public threat on twitter.  And I quote "that any one soldier or civilian who kills a Fulani Man takes a loan payable one day no matter how long it takes"

This threat is coming to pass now because most of the gallant military men fighting Boko Haram are from the South- Biafrans and Yorubas and the military now sabotage them making sure they kill them for fighting against their Islamic fundamentalists during the tenure of Dr. Goodluck Jonathan, the Christian president who handed Nigeria to the present Muslim president of Nigeria, Muhammadu Buhari.

We are actually in a big mess herein but we will survive.

Naomi: Do you believe there can be a peaceful way for Biafra to gain independence from Nigeria?

KC: Firstly, we are a very peaceful people and we seek and make peace wherever we find ourselves. Take for example the leader of IPOB- Indigenous People of Biafra, Mr. Nnamdi Kanu has been in prison custody since October 15, 2015. His only crime is that he is seeking for the United Nation mandate on self-determination for a unique people, in essence Biafrans in Biafra land and he also operates a radio station-- Radio Biafra in London where he resides. He is also a British and Nigerian citizen.

We have continued to call on the United Nations, United States, the European Union, and all world powers to assist in a peaceful referendum and to determine the genuineness, importance and urgency of our struggle for freedom from Nigeria. Nigeria simply means Niger area or an area of land around the river Niger. 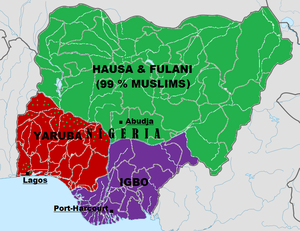 The three nations found in Nigeria- the Arewas--mostly the Muslim Northerners, the Oduduwas -- Westerners composed of Muslims, animists, Christians, and the Biafrans-- in East of The Niger, who are 99% Christians and 1% animists. Three of us are heavily heterogeneous; we don't have any thing in common, no history of having been together before the coming of the British and after they joined us in one country, the remaining two became envious about the Biafrans and started killing us.

Actually the British literally handed over power to the Arewa Muslims so that they could control Nigeria from London, use them to suppress and kill us, the Biafrans. This was exactly what happened during the Biafra -Nigeria civil war. The British gave Nigeria arms; annihilated us from the face of the earth. But being a resilient people we fought three years before running out of food and arms. The Northern Muslims are actually the least literate of the three nations.


Naomi: In 1968 Israel sent an airlift of aid to Biafra. If you could now ask Israel for help again, what would you request?


KC: We would like the Israelis to assist us in lobbying the world powers especially the United States, Russia, Canada, and the South Americans to fast track and pressure the current government to grant a referendum for the Biafran people. By the way, Buhari, the

president of Nigeria spoke extensively on Palestinian freedom during the last UN general assembly. We simply ask him to do to us what he would want Palestine to be. And that shows his deep hypocrisy supporting self-rule outside his country but suppressing demands for self-rule in his country Nigeria. But if after continual persuasion Buhari doesn't give in, on the long run we have to take our freedom by force.  Here we will need the Israelis to train us and arm us to defend our land.

Currently, some part of our lands have been overtaken by the murderous Fulani herdsmen. They kill our people and take their lands with a final aim to Islamize our people.  So we seriously need the help of Israel and the advanced Christian world to protect our land and our people.

Naomi: I am finding that the Biafrans are intellectual and sensitive people. I read that there are many millions of poets in Biafra. Is that true?

KC: Biafrans are well talented people like the Israelis and you find us in every sphere of life including poetry although I am a scientist. We have many poets because our creativity are inbuilt. Hence the envy by other Nigerians against us.


Naomi: Just to end this interview on a sweeter note, can you name a few foods that you love from Biafra? Any family recipe you would like to share?


KC: My best food from Biafra land is the bitter leaf soup with garri or semovita made from cassava. We swallow it in moles. Swallow in moles means we roll the meal in the form of a ball before swallowing. We eat a lot of starchy food and you find most of us with pot bellies. Most of us also derive joy in the table. We also have a handful of traditional recipes like Okpa, Abacha or Africa Salad  and various soups, particularly the white soup and palm oil soup just to mention a few.

Naomi: Thank you for your time KC, I have enjoyed getting to know you and I wish you and all of Biafra a free life and continued success.

KC: I hope I answered your questions. Still grateful once again for sharing my life with you!