It was fun to fly to Los Angeles to attend the awards dinner for the Southern California Book Festival. I had a wonderful evening! The Masada Faktor, my newly published book of adult fiction, received Honorable Mention and I gave a short speech which I am sharing below. 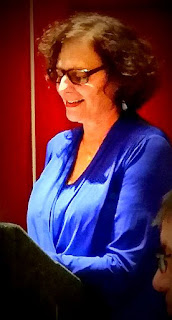 Hello everyone! It is so wonderful to be here to receive this Honorable Mention for The Masada Faktor. My page of acknowledgments in my book states, “I have no one to thank but myself.” But now, I am extremely grateful to be able to thank The Southern California Book Festival for this recognition and validation of my creativity in writing my first book of fiction.

The Masada Faktor is my third book. My first two books are non-fiction. I am proud of those books, as I recorded my family history and also how my entire life was affected, both positively and negatively, as the child of both a holocaust survivor and the American GI hero who brought her to America.

I was inspired to write the mystery of The Masada Faktor when I went to Israel last year in 2014. I made Aliyah, which in Hebrew means that “I ascended, or climbed a mountain.” I became a citizen of the Great State of Israel, while retaining my American citizenship.  Initially I spent six months in Israel. I traveled the country, lived in three different cities, was caught up in the Gaza War, and dreamed up the plots that played out in my book, while also documenting some of the history of terrorism that has occurred in Israel.

While I was there, I went on a tour of Masada. I ascended that mountain, the ancient fortification and greatest Jewish symbol where, two thousand years ago, the last Jewish stronghold against Roman invasion stood. It was there that I conceived of what I was able to eventually put together to create The Masada Faktor.

This book is my contribution in the fight against the existential threat that continues daily against my people and the terrorism that is now occurring worldwide by the barbarians at the gates. Thank you, again, for this incredible honor for my book, The Masada Faktor.


Some of the highlights of the evening..."Dear Southern California Book Festival Entrant:

It was an amazing night in an amazing part of Los Angeles on Saturday. Gathered at L.A. Live, we heard from the winners of the festival while dining on some amazing food at Fleming's restaurant. There were a few toasts, a few laughs, and some tears as we honored the winners of the 2015 event.
We heard from Jason Latshaw, whose first novel is destined to be a film or TV classic; enjoyed the back-story from former Romper Room host Karen Robbins on her innovative children's book; were moved by the amazing story of Ted Haskins, who only learned of his large family years after his birth; saw the beginnings of what's sure to be a new series from Tricia Stewart Shiu; learned of the power behind her mentor's work from editor Lila Ivey; heard about the triumphant journey of author Donna Friess thanks to the support and encouragement of her husband; and heard how great science fiction is created from Jonathan Maas.
It was a wonderful evening of celebration and we thank everyone who battled the snow to make it to Los Angeles!"