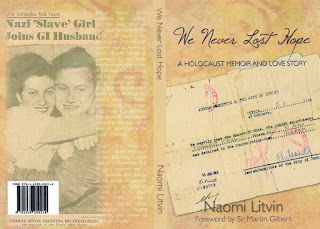 I am proud to present a four star review for my book, We Never Lost Hope: A Holocaust Memoir and Love Story that was written by Walter Ko,  spokesman for Global Alliance For Preserving The History of WWII in Asia.


"The Global Alliance, a world-wide consortium, is dedicated to disclosing truthfully the facts about the Asia-Pacific War (1931-1945). Only by accurately reconstructing and carefully studying the history of this period can justice be restored to millions of victims of Imperial Japan's aggression, invasion, and occupation of mainland Asia and island nations of the Pacific."

Here is the recent conversation I had with Walter Ko regarding my book.


Walter Ko: I posted a review 2 days ago. Hope you enjoy.

Naomi Litvin: Hi Walter. I had a chance last night to read your review and thank you very much. If it is o.k. with you, I will post it to the “review section” of my website. You are actually the first person to point out in a book review for my book that the Japanese did not apologize for their concentration camps.

Walter Ko: You are welcome to post it in your website. Yes, Japan does not come clean. We have friends in Holland demanding justice for their pain and suffering.

Naomi Litvin: I know they pretend to have a pension fund for those who suffered in WWII, my aunt (now deceased) from Binghamton NY (Piri, in the book) tried to get help before she died, but they put her through the hoops and then refused her application.

Walter Ko: They are still spinning on Rape of Nanking, slave labors, comfort women. Every year, officials come to worship the Tokyo Shrine where housed the Tokyo Trial and executed war criminals. I visited there in 1999. Talk more later.


We Never Lost Hope: This is a combined simple history of two Jewish families of Europe and America. Naomi, a freelance writer documented her family history from a small farm in Satu-Mare Romania in a peaceful and simple hotel business. However, They were rounded up tragically to Auschwitz. They managed to endure and survive the horror of Holocaust. Some families suffered both Axis brutality of Germany and Japan as they were in Dutch Indonesia.


As American Forces landed and liberated Europe, Edith Festinger met Nate Litvin and developed the romance. They married in France and she came to New York as the first War Bride under lime light. They led a new life in the land the free and the brave in post war peace.


It is one of the six million Jewish story with the testimonial of life and death, war and peace, holocaust and love, sorrow and happiness, old and new. The intimate narration of the family members is plain and simple but yet powerful. They were the lucky ones to endure with hope that the dark days of nightmare would soon be over. As Germany apologized and compensated significantly and meaningfully to Holocaust victims, her Axis partner Japan still is in the denial mode to Asians, Dutch and American POWs.


This book is a small page in the Holocaust with names, faces and designated stars. It is the hope and love to a new life. Naomi did a fine job in sharing that to live on is a victory over Nazis.


Objectives
"When the world learns the historical truth of the Asia-Pacific War, a formidable popular consensus will compel the Government of Japan to honor its postwar responsibilities."

Our goals based on our mission


That Japan shall forthrightly and unequivocally apologize for war crimes and atrocities, and make just and fair compensation to its war victims; and that Japan shall rectify its distortion, denials, and whitewashing of its war history.

Our minimal requirements are Diet-enacted legislation, signed into law, that the Government of Japan:


Only when Japan sincerely acknowledges and works toward discharging its postwar responsibilities will Japan become once again a responsible and respectable member of the international community.


To bring enduring peace and harmony among all Western Pacific nations, to find closure and reconciliation for painful memories, and finally to end the Asia-Pacific War.