Every family has its legends. My father's family, known as the Litvin/Lettvin clan includes Jerome Lettvin, who is the nephew of my paternal grandfather, Baruch Litvin, known as the Mechitza Warrior from Mount Clemens, Michigan, who took his case for keeping our shule Orthodox to the Michigan Supreme Court. 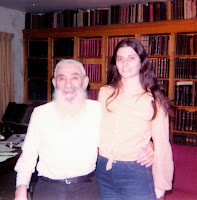 "Legal battles were fought in the 1950s in America, as Jews used the civil courts to force one or the other practice. One of the most famous cases was the Mount (Mt.) Clemens case, in which one man, Baruch Litvin, sued his congregation for depriving him of his rights by changing the seating to mixed pews. The court ruled in his favor and the mehitzah remained. This case was an important element in the hardening of the Orthodox posi­tion. Litvin collected various rabbinic sources, statements, and responsa in the book, The Sanctity of the Synagogue

. Though Ortho­dox responsa forbidding mixed pews had been written before, after the publication of Litvin's volume, all Orthodoxy became defined by this one practice. Today, an Orthodox congregation is largely defined by the pres­ence of a partition."    from  Mehitzah: Separate Seating in the Synagogue by Dr. Norma Joseph.


But I should get back to my Zeide's nephew, second cousin Jerry, who is Jerome Lettvin (born Chicago, February 23, 1920.) Jerry is a distinguished cognitive scientist and professor Emeritus of Electrical and Bioengineering and Communications Physiology at the Massachusetts Institute of Technology (MIT.) What he is best known for in our family, is that he was first person to utter an expletive (bullshit) on television, during his famous debate with acid-head Timothy Leary. Leary, infamous for coining the phrase "Turn on, tune in, drop out." Here is the part of that debate.