We Never Lost Hope: A Holocaust Memoir and Love Story ~ Press and Events

Author Naomi Litvin was featured at a free Book Talk Sunday, Nov. 8, 2009 at Afikomen Judaica in Berkeley. Naomi is author of We Never Lost Hope which recreates her parents' incredible love story in the powerful memoir. Litvin is the daughter of a Holocaust survivor and an American Jewish GI who landed at Normandy. She lets her family members reveal the stories of their lives before, during, and after the Holocaust. Told in five indelible voices, the book gives a you-are-there punch and a moving immediacy. Lovely and haunting, We Never Lost Hope is a reminder that genocide can happen anywhere, and that we all must be vigilant against the forces of hatred. 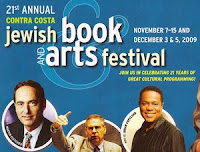 Nate Litvin had appealed to Gen. Eisenhower for help.
Then the War Bride's Law was enacted.
The Forward, New York City, August 1946 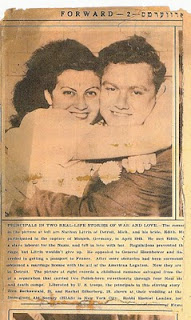 The End is The Beginning,
Buy the book!
We Never Lost Hope: A Holocaust Memoir and Love Story