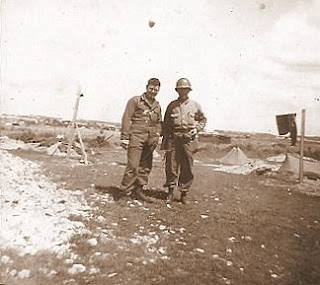 Nathan Litvin
Jewish American GI
from Mount Clemens, Michigan
above on left, at Utah Beach, after D-Day, 1944 in Normandy.
Sir Martin Gilbert stated on the back cover of his book  D-Day--


"The Allied landings in 1944 had all the prospects for disaster. Churchill thought he would be woken up to be told of massive casualties. Eisenhower prepared a somber broadcast announcing that the enterprise had failed

The specter of failure was always present. After a failed landing the Nazi regime would have regained the ascendant. New, terrifying bombs and rockets were ready to be launched. Long-distance submarines were in the final stage of development. The last million Jews of Europe were listed for deportation and death.

Failure at Normandy could have given Hitler the chance of continuing to rule western Europe, particularly if the United States, bloodied and defeated  in Normandy, had decided -- after two and a half years of focusing on Europe -- to turn all its energies to the ever-growing demands of the Pacific, leaving Europe to its own devices. Had that happened, I doubt if I would have been alive to write this book, or free to express my opinions without fear of arrest."

Nathan Litvin was my father. I remember my father as a hero, a brave Jewish American GI. He met my mother, an Auschwitz survivor, in Munich, Germany after liberation. He has been gone from this earth for eighteen (Chai) years. Now, my mother has been gone for six weeks and they are reunited.

An excellent book and a fascinating read is D-Day, by Sir Martin Gilbert.
Martin Gilbert has kindly contributed one of the maps from D-Day and a foreword to my book We Never Lost Hope: A Holocaust Memoir and Love Story